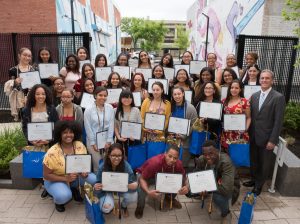 The 35 LHS seniors who were recognized for participation in the Early College Program. All are headed for college in the fall.

Thirty-five Lawrence High School seniors will be heading to college in the fall with up to 18 college credits each, thanks to their participation in the Northern Essex Community College Early College Program.

The students were honored at a recognition ceremony held on May 22 at Northern Essex’s El-Hefni Allied Health & Technology Center.

Aysha Polanco will bring her 12 Northern Essex credits to UMass Dartmouth where she will major in Crime and Justice Studies.  She hopes to intern with the FBI and chose UMass Dartmouth because of its internship program. Because of her participation in the Early College Program, she plans to graduate from college a semester early, allowing her to get started on her master’s degree.  “This program was extremely helpful,” she says.  “I feel ready for college.”

Michael Fiato, Lawrence High School principal, who spoke at the event, said Early College programs like this one help more students to be successful.  “One of the main reasons kids drop out of high school is that they are underprepared,” he said.  “This program addresses that.  All are going to college.”

The top college choice for the group was UMass Lowell, which has accepted 11 students for the fall.  Eight students have elected to start their education at Northern Essex, the second most popular choice, and the others are going to a wide range of public and private colleges including Providence College, Boston University, College of the Holy Cross, Tufts University, and more.

Students in the Early College Program chose from four college tracks: health, education, computer and information science (CIS) or engineering.  After their high school classes were over, the students boarded a bus and traveled to Northern Essex’s Lawrence Campus for their college courses.

One hundred and two Lawrence High School students took courses at Northern Essex this past year at a discounted cost of $110 per credit.  Tuition and fees were covered by a $2 million grant from the Smith Family Foundation, which Lawrence Public Schools received last fall.  The grant funded partnerships with Northern Essex and Merrimack College.

Student Speaker Juana Paola Guerrero, who will bring 15 credits to UMass Lowell in the fall, said it was challenging but totally worth it.  “The Early College Program allowed us to experience what college will be like.  We improved our time management skills and what we learned will ease the transition to college.” 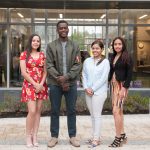 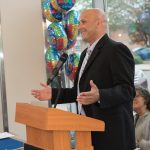 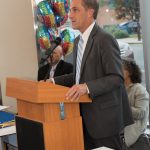 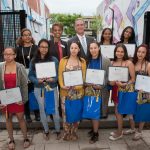 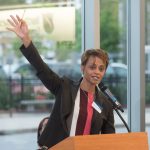 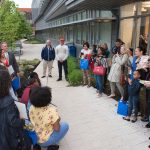 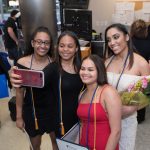 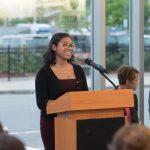 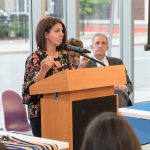