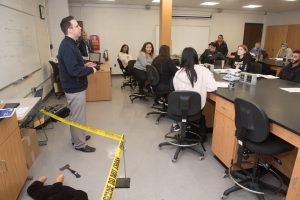 NECC Professor Mike Cross stands next to a staged crime scene during a forensics class.

Some days they dust for fingerprints. Other days they perform DNA analysis, or investigate mock arson cases. These are students in Northern Essex Community College’s lab science program and they are concentrating on forensic science.

NECC began offering the forensic science concentration in the fall of 2017. There are currently 11 students enrolled in the concentration.

Thanks to the popularity of television crime shows, interest in forensics has been on the rise and the NECC lab science concentration is a good introductory course for students who think they may want to study forensics. Students gain hands-on experience with the actual equipment that is used in a crime lab. Lifting fingerprints, DNA analysis, and investigating mock arson cases is all part of the curriculum. In addition, the forensic students complete a research project in forensic science and an internship. 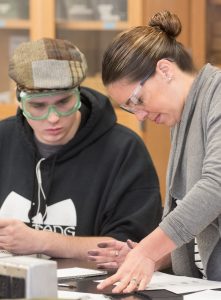 Students in one of the forensics science classes offered as a concentration in NECC’s laboratory science program explore fingerprinting techniques.

Graduates of the program, according to Natural Science Professor Mike Cross, who helped design the concentration, can continue their education at a four-year school including UMass Lowell, Salem State University, and Bay Path University. They could seek careers as crime scene investigators and forensic evidence technicians. Forensic science, said Cross, is a small but quickly growing field. The U.S. Bureau of Labor Statistics estimates there will be a 17 percent increase in forensic science jobs within the next decade

“Our forensic science (concentration) graduates are especially well-prepared for the job market as they have the skills and training to work not only in forensic science, but in any field of lab science,” Cross said.

Northern Essex began offering the concentration after NECC Criminal Justice Professor Paul Cavan noted that a number of criminal justice students were interested in studying forensics. He approached Cross and together they developed a singular forensic course. In just days the first section filled. Since it fulfilled a general laboratory science requirement, students from all majors enrolled – not justice criminal justice majors. Eventually that single forensic course led to the forensic concentration. 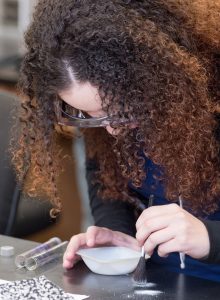 A student in a forensic science class conducts an experiment.

“As I taught the course I found that many students were interested in pursuing a career in forensic science,” said Cross. “These students often choose criminal justice as a major, but would be much better served by a degree tailored to their needs. They would obviously need more than just one course in order to be prepared to be a crime scene investigator. Forensic science seemed a natural fit in the Laboratory Science Program and so we developed it as one of the four concentrations within the program.”

Other concentrations offered for the Laboratory Science Program include Analytical Chemistry, Biotechnology, and Environmental Sciences.

For additional information on the Laboratory Science Program visit the website

Or contact Kevin Mitchell, the lab science program coordinator at kmitchell1@necc.mass.edu or call 978-556-3343.