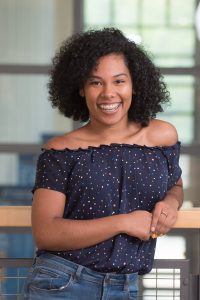 Paoli Rodriguez never imagined she would enroll at Northern Essex Community College where her mom works as a tutor…that is until she toured other colleges and reviewed their tuition costs.

After several college tours, her mom outlined the cost comparison for her and she understood the value in attending Northern Essex.

Now, the Haverhill resident is finishing up her first year at NECC with a long list of accomplishments to add to her resume including two scholarships. The liberal arts: psychology major recently received the NECC Campus Inclusion Leader Award as well as the Pentucket Bank Scholarship. She is one of nearly 200 Northern Essex students, more than 40 are Haverhill residents, to share approximately $170,000 in scholarships.

Born in the Bronx and raised in Lawrence until the third grade when her family moved to Haverhill, Rodriguez attended the Bradford Christian Academy as a high school student. When junior and senior years approached and her peers began talking about attending large colleges and universities she was naively part of the conversation too.

“I had been involved with the 5K at Northern Essex because my mom worked here. I knew it had a nice campus, but it was too close to home for me to consider attending,” she said.

One mother-to-daughter talk is all it took for her to realize NECC offered the classes she wanted for the tuition she could afford. After enrolling in classes she set about immersing herself in Northern Essex culture. She is a work-study student for the civic engagement and service learning program, she volunteers with the monthly mobile food market and conducts campus tours. She is a member of the Pathways to Academic and Career Excellence Program (PACE), the African Studies Club, and she has been nominated for the NECC Student of the Month Award.

“Paoli loves to be useful,” wrote Behavioral Science Professor Isabelle Gagne in her letter of recommendation. “Paoli is the type of student who embodies the word community in the mission statement of the college…she is involved, stays after class to discuss concepts, volunteers, and encourages other students to register and excel.”

Even with the affordable price-tag, the 19-year-old said the scholarships are taking a bite out of tuition and book costs for her and her family for which she is grateful.

“These scholarships will help me to be able to focus on my academics so I can continue in my major and graduate on time without the worry of paying big tuition,” she said. “There’s nothing wrong with asking for help.”

With her older brother also attending NECC, the college has truly become a family affair.

“I love Northern Essex with all my heart,” she said. “The resources here are amazing. I have an academic coach who is like a sports coach. She has me state my goal, think about how I will accomplish it, and write and action plan. People are here to help you, but you have to help yourself first.”