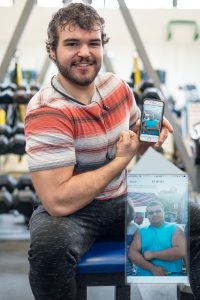 Adam Kinser knew he had everything to gain when he enrolled at Northern Essex Community College, but he had no clue as to what he would lose.

When the 22-year-old Haverhill resident receives his Associate of Science in Engineering Science Degree in May of 2019 he will be nearly 105 pounds leaner than when he initially walked on campus.

Both, it seems were happy accidents. A 2014 graduate of Whittier Regional Vocational High School, where he was ranked 11th in his class, Kinser waited until the last possible day to enroll for an NECC summer class. That’s all it took for him to shelve the idea of being an electrician like his dad and instead pursue a degree in engineering science.

Then a funny thing happened on his way to a degree. A former wrestler and baseball and football player, he was weighing in at close to 300 pounds when he started visiting his friend who worked for NECC’s Sport & Fitness Center on the Haverhill campus. In addition to lifting weights, which he was accustomed to, for the first time he began to scrutinize his diet. Within a few semesters his five-foot, eight-inch frame was carrying just 183 pounds.

Today he works on maintaining his weight as well as his 3.65 GPA. In addition to classes at Northern Essex, he also takes classes at UMass Lowell through the Northeast Consortium of Colleges and Universities in Massachusetts (NECCUM) Program. The program allows our students to take classes at nine area public and private colleges and universities and pay NECC tuition.

If nothing else, Kinser has perseverance. While it took him three attempts and hours in the math center, to pass Calculus 3, he did it.

A 10-weeks internship he procured through NECC kept him busy this summer. He worked for a UMass Lowell graduate student who experimented in polymer processing. Early in the summer he worked for a landscaping company. He banked his earnings so he could devote his time to his studies.

“School always comes first,” he said. “All my friends are studying engineering. I learned the hard way that unless I put in the time, the work just isn’t going to get done.”

One day, he hopes to take his degree from NECC and bachelor’s from UMass Lowell, which he hopes to earn by 2020, and work on engine design in the automotive industry.

“I love anything with an engine,” he said. As is evidenced by his white and blue, 1984 Honda Interceptor. He’s content riding to class whether it’s NECC or UMass Lowell.

“Northern Essex is definitely a best option,” he said. “Money wise I’m in the least amount of debt out of my friends. I tell everyone ‘come here and see what you like. Don’t rush through college.’.”