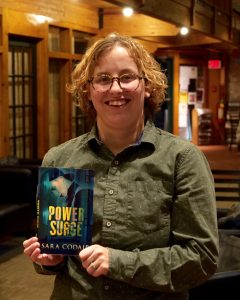 On December 5 at 4 p.m., Sara Codair, a local author and NECC instructor, will speak about the process of getting a novel published. By telling the story of how their novel, Power Surge, got published, Codair hopes to educate attendees about the different paths writers can pursue when trying to get their book published.

Sponsored by the NECC Library, the presentation is free and open to the public and will be held in the library on the college’s Haverhill Campus, 100 Elliott St.

Codair will discuss the benefits and disadvantages of self-publishing, directly submitting to small publishers, and searching for an agent who can submit an author’s work to larger publishers.  Additionally, Codair will explain why they chose to publish their first book with a small publisher.

In 2007, Codair worked on related stories in screen writing and fiction writing courses at Northern Essex Community College. After years of drafting, rewriting, revising, and editing, the stories Codair wrote as a student evolved into the novel, Power Surge.

Power Surge follows 17-year-old Erin, who has just realized that for the entirety of their life, their family has lied to them. Their Sight has been masked for years, so Erin thought the Pixies and Mermaids were hallucinations. Not only are the supernatural creatures they see daily real, but their grandmother is an Elf, meaning Erin isn’t fully human. On top of that, the dreams Erin thought were nightmares are actually prophecies. While dealing with the anger they have over all of the lies, they are getting used to their new boyfriend, their boyfriend’s bullying ex, and the fact that they come from a family of Demon Hunters. As Erin struggles through everything weighing on them, they uncover a Demon plot to take over the world.

“Power Surge is about more than just the paranormal,” said Codair. “It is also a novel about coping with mental illness, acceptance, and forgiveness.”

In addition to teaching writing and tutoring in the writing center at Northern Essex Community College, Codair has published over fifty short stories and poems in markets like Broadswords and Blasters, Vulture Bones, Alternative Truths, and Drabbledark.  Codair has an associate’s in journalism communications from Northern Essex, a Bachelor of Arts in Creative Writing from UMass Lowell, and a Master of Arts in English from UMass Boston.