From Retail Sales to Computer Programming 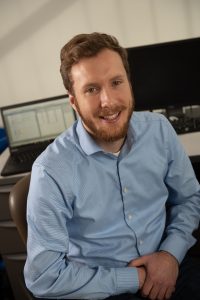 Alex Bochman started college right after graduating from Methuen High School in 2011, but his heart wasn’t in it.  After just two semesters, he dropped out and went to work full time.

He worked locally for retailers like Sears, Best Buy, and Vans.  He even took a year to live in Vermont and work at a ski resort.

But, after three years away from school, he felt he was missing something.  “I wanted to be an educated person, to better myself,” he said.

Once he realized he was ready for college, Bochman focused on selecting a major.

Known as the “family IT guy”, the one to call when the computer won’t start or the printer isn’t working, Alex knew he was good at computers, so he figured this would be a good place to start.

In the spring of 2015, he enrolled in the Computer Science Transfer program at Northern Essex, signing up for three courses, including programming.

That semester everything clicked for him.

“Programming is really rewarding.  Building a program and seeing it work is a great feeling,” he said.

Bochman will graduate in the fall of 2019 with high honors and plans to transfer to UMass Lowell for a bachelor’s in computer science.

Best of all, he now has experience in the computer field, thanks to an internship with Parker Hannifin, a global leader in motion and control technologies, which he received through the college.  That internship led directly to his current position where he works in IT for Hockmeyer Studios in Amesbury.

His ultimate goal is to be a programmer.

Bochman is pleased with the direction his life is taking and he has advice for others who are thinking about college.  “Take the time to research a major. Start with what you’re interested in, or what you’re good at, and then go from there. In my case, working with computers has always been one of my interests, so I decided to progress that skill.”