Transferring Credits In to NECC 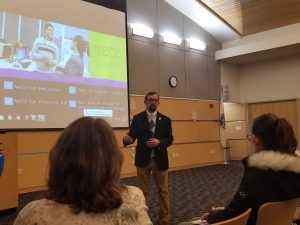 Danny Richer, NECC’s director of admissions makes a presentation during a “transferring in” information session.

If you started college but found it wasn’t a good fit for any reason, Danny Richer, Northern Essex Community College director of admissions, wants to talk with you.

“Many students get started somewhere else, but stop out for financial, academic, or other reasons,” says Richer, who recently led an information session for students interested in transferring credits in to Northern Essex.

Close to one-third of students enrolled at Northern Essex in the fall of 2018—1484 out of 5106— had credits from another college on their transcripts, a percentage that has remained steady over the past five years, but has recently started to climb.

Applications for students interested in transferring in to Northern Essex for the spring semester, which starts January 23, are up 20% over last year, increasing from 300 to 359.

Many Reasons for Transferring In

There are lots of reasons the first college might not have been a good fit, including academics, affordability, social climate, or geography, says Richer.

Kiley Broadhurst is a classic example.  The 2016 Timberlane High School graduate started at a four-year private college in Florida, thinking she needed to go to college far from home.  After one semester, she hadn’t decided on a major yet and felt she was spending a lot of money to explore her options.  That’s when she decided to come home and do her exploring at Northern Essex.

“I just wanted to be at a place that could help me get an education without putting me into considerable debt. And eventually I recognized that the place I wanted was much closer to home,” said Broadhurst, who has decided to focus on journalism/communications.

She will graduate from Northern Essex with her associate’s degree in May with plans to earn a bachelor’s degree.

Steps for Transferring into Northern Essex

Enrolling students are required to take an assessment test that covers reading, writing, and math, but many students with prior college experience may have the test waived, based on courses they have already taken.  For example, a student who has successfully completed a college-level math class will not have to take the math assessment.

NECC will Accept Up to 36 Credits

Students can transfer a maximum of 36 credits into one of Northern Essex’s associate degree programs and up to 12 credits into a certificate program.

Most programs at Northern Essex are 60 credits, although some programs, such as computer science or engineering, require additional credits—up to 68.

Transfer After Earning an Associate Degree

Once a student has earned an associate degree, they can transfer from Northern Essex to their choice of colleges, public or private.

“Our grads go to 130 different colleges and universities after Northern Essex,” says Richer.

The MassTransfer Pathway provides a seamless transfer for students who are interested in transferring to any of the public college and universities in Massachusetts, including UMass Lowell, UMass Amherst, or Salem State.

The college also has transfers agreements with private colleges, such as Merrimack and Endicott colleges.

By starting at Northern Essex and transferring to a four-year college, a student can save 40 percent or more on the cost of a bachelor’s degree, says Richer.

It’s not too late to enroll for the spring semester, which starts January 23.  For additional information, call 978 556-3700, email admissions@necc.mass.edu, or visit the website.