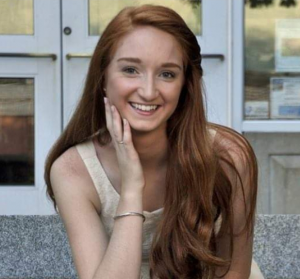 Hailson, a liberal arts writing major, was nominated by NECC President Lane Glenn, who wrote “Katherine has a drive to make the world a better and more equitable place. Fueled by her own experiences of gender discrimination in high school, Katherine headed to Northern Essex Community College with a motivation to make a change. Here, Katherine has paired civic learning with civic action.”

With a 3.56 GPA, Hailson has advocated for change both at Northern Essex and in her community.

During her first year at Northern Essex, Hailson joined the Contemporary Affairs Club, a student lead organization for students to discuss politics, government and international affairs. Joining this club gave Hailson “the confidence to go out into my community and make change where I could.”

Shortly after joining the Contemporary Affairs Club, in the summer of 2017, Hailson worked as a campaign manager interning for a local woman running for city council.

“She is a change-maker and public problem-solver who is perfectly suited for this opportunity,” wrote Glenn.

In the fall of 2017, Hailson served as President of the Contemporary Affairs Club, where she lead club meetings, organized relevant speakers and field trips, and worked closely with the college’s president and Student Government Association.

The Newman Civic Fellowship distinguishes and supports students who have shown leadership and an investment in their communities across the country to help solve problems they may be facing. It is a yearlong fellowship program that provides a variety of opportunities for the student to network, learn, and grow. This includes attending a national conference of Newman Civic Fellows. The fellowship is named after Campus Compact founder Frank Newman, and focuses on the skills fellows will need to effectively and actively set and accomplish goals that address public problems and build equitable communities.

In her personal statement Hailson wrote “I will continue advocating and fighting for women’s rights in the workforce until complete equality is achieved.”

In addition to her studies and political activism, Hailson has also maintained multiple part-time jobs, primarily working with young children. “This highlights her ability to effectively manage her time, along with her exceptional interpersonal communication skills,” said Glenn.

Hailson plans to graduate from Northern Essex in the spring of 2019 and hopes to transfer to the University of Massachusetts at Lowell and major in political science, focusing on public policy.

Hailson will be mentored by Patricia Portanova, PhD.