A Passion to Serve: Lawrence Police Officer Shares His Story 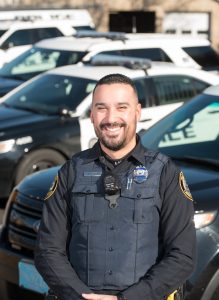 Alumnus Ivan Soto ’14, a member of the Lawrence, MA Police Department, was on duty the afternoon of September 13, 2018, when he received the shattering news from his wife: his house was engulfed in flames – one of the nearly 80 homes in all that would be damaged or lost during the Merrimack Valley gas explosions that devastated parts of Lawrence, Andover, and North Andover that day.

In the wake of the news, Soto was faced with two options: salvage what he could of his home or return to work. He chose the latter.

“As a police officer you swear to protect and serve your community,” Soto says of his decision.

After checking on his home and ensuring that his wife and two daughters were safely evacuating the city, he returned to his police cruiser and did just that – working and fighting alongside the thousands of others who were affected that day. It was a moment, he explained, that would have a permanent influence on him.

“This has certainly changed my life forever,” he says, noting the many people who, months later, are still struggling amid the aftermath.

The decision to work on as his home burned, while seemingly counterintuitive, was a no-brainer for someone like Soto, who had long been drawn toward the idea of protecting his community.

“I have always been interested in law enforcement,” he says. “It’s a selfless but rewarding career and I knew I was meant to be part of it.”

Soto’s journey to his current career began back in 2012, when he first enrolled at NECC as a criminal justice major and began to develop the skills required to push forward. He credits the many professors he met along the way with helping him make it to his current position.

“My NECC professors were just inspiring across the board – particularly my criminal justice professors. They always gave us advice on how to pave our own way into the field.”

And pave the way he certainly did. By 2014, Soto had earned a certificate of completion in law enforcement and an Associate of Science Degree in Criminal Justice. He only continued on from there, graduating from the NECC/Methuen Police Academy in 2017, at which time he was sworn in as an officer to the Lawrence Police Department.

His short time in law enforcement since them has brought with it an incredible array of challenges and rewards alike, but throughout even the most difficult moments he stands firm by his mission to serve the community – and his decision to start it all with NECC. “If I could,” he says, “I would do it again.”