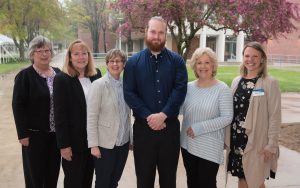 William Rollins (center) with members of the NECC Alumni Board

Haverhill resident William Rollins has been named as the recipient of the 2019 Outstanding Student Award, a selective honor distributed annually by the Northern Essex Community College Alumni Board. He was recognized during NECC’s annual awards convocation ceremony on Tuesday, May 14, where he also received a new laptop, courtesy of Dell, Inc.

A veteran of the United States Marine Corps and a first-generation college student, Rollins served the country for over five years before enrolling at NECC. He arrived on campus in the fall of 2015 and, with the GI bill at his disposal, began working toward a degree in General Studies: Individualized Option to explore a range of fields at that time.

To this end, he excelled. By the fall of 2018, Rollins had earned a GPA of 3.77 and had become involved with a range of activities, including the Pathways to Career Excellence (PACE) program, Phi Theta Kappa, and the National Society of Leadership and Success – while simultaneously holding down two jobs. His efforts as a campus leader have not gone unnoticed. In the spring of 2019, Rollins received recognition by the Jack Kent Cooke Foundation, which selected him as a semi-finalist for their competitive scholarship program.

In a letter of recommendation, nominator Jessica Rocker, PACE transfer advisor, described Rollins as a “role model,” adding: “Williams’ dedication and commitment… is inspiring. It is rare to find a student with this much ambition and drive.”

Rollins, who graduated this spring, will continue his studies at Worcester Poytechnic Institute (WPI) this fall, where he will pursue a bachelor’s degree in aerospace engineering. He expresses his gratitude for the role that NECC has played in getting him to this point.

“NECC has helped me in more ways than I can count,” he says. “It has given me a whole new life experience just by bringing me to campus. I have gotten closer to my community and been made aware of what is going on around the world. NECC has helped me break out of my own little shell.”

The Outstanding Student Award is given each year to a graduating student who has exemplified exceptional commitment to community service initiatives and/or high academic achievement. Recipients must be nominated for the award and selected for approval by the NECC Alumni Board, following a vote.

This year Northern Essex awarded nearly 1,100 associate degrees and certificates to deserving students. The 57th annual commencement was held on the Haverhill campus.