She Knows Where the Computer Jobs Are 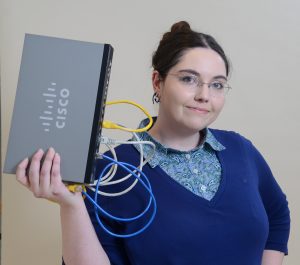 Adrianna Holden-Gouveia has been surrounded by technology for as long as she can remember.

Decades later, she is still playing with technology only now it is at the front of an NECC classroom.

“I’ve always been into technology,” the NECC computer and information sciences (CIS) professor says. “I can’t really remember a time when we didn’t have something tech related in the house to play with.”

Despite having grown up with technology or maybe because of it, Holden-Gouveia says, the subject never, ever gets old. Now one of the CIS department’s longer serving faculty, she is a serial learner who absorbs the latest technology and presents it in a relatable way to her students. She is also quick to identify trends and share technology buzz with anyone who has the good fortune to follow her on social media.

Holden-Gouveia has been instrumental in keeping the CIS program current and within the reach and needs of local employers. In addition to offering top-flight courses, NECC this year unveiled its new networking and security associate degree program that all but ensures a high-paying position upon graduation.

“It’s always changing. I never teach the same course twice…my courses change between 20 and 50 percent each year because I introduce new topics, new books, new assignments, and new skills. Even week to week there is always some breakthrough in technology.”

With this evolution in mind, Holden-Gouveia has her students bring a tech news item to class each day. She practices what she preaches – often Tweeting news articles relating to technology.

“The first 10 minutes of each of my classes begins with tech news,” she says. “Whether it’s gaming, biotechnology, assistive technology, or even a cool, new gadget, something is happening every day.”

While she teaches a variety of CIS, information technology, security and networking classes, Holden-Gouveia has a soft spot for the introductory classes.

“It’s so much fun to see the students get into technology if they weren’t already or get more into it if they already were,” she says.

Holden-Gouveia was, herself, already into technology when she enrolled at Clark University where she double majored in theoretical math and computer science and minored in art. She also earned an MBA from Rivier University.

“Tech is so cool by itself, I don’t have to work too hard to find fun things to do and get students interested,” she says.

“There are literally hundreds of thousands of computer networking and security jobs that are going unfilled,” she says. “There aren’t enough trained workers to fill the jobs.”

Now is a great time to enter the CIS field, she says, There were 200,000 unfilled cyber security jobs in the U.S. last year; Some of which not even one person applied, she says. One industry report, she says, indicates that the shortage worldwide is closer to 1 million unfilled jobs in cyber security and data analytics.

What type of jobs will graduates be prepared to fill? Junior network administrators, system administrators, and anything in disaster recovery or computer security incident response team are a few of the career options.