He may have only been in the 4th grade when a teacher noticed and encouraged his artistic talent, but right then Kelvin Sabando decided what he wanted to be when he grew up – an artist. 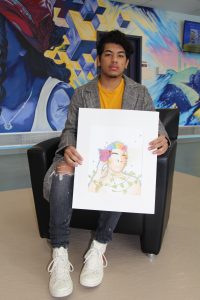 He didn’t know it then, but Northern Essex would help him get there.

Now, at 19 years-old Sabando is an artist and come May, he will graduate with his associate degree in General Studies: Art & Design.

Sabando remembers his teacher telling him, “Project your art to as many people as you can. You have a gift that I would love to see blossom.” Those were words for Sabando to live by.

Years later as a sophomore at Lawrence High School an Accuplacer Test identified him as a candidate for Northern Essex’s Early College Program, which allows high school students, as early as sophomore year, to enroll in college classes. After completing Early College, Sabando was eligible to continue at NECC through the Promise Program, which funds Early College students to complete the degrees they started.

When Sabando told his mom that his NECC degree would be funded through the Promise Program, she “burst into tears” and told him what he already knew – that he would be saving thousands of dollars while earning an associate degree.

By the fall of 2020, the South Lawrence resident, whose current medium of choice is water colors, hopes to be enrolled in a bachelor’s program. While he initially thought he would apply to Wentworth Institute or Massachusetts College of Art, he now says he has developed the confidence to dream bigger and apply to schools in New York City.

An unexpected yet positive consequence of participating in the Early College and Promise Programs is that he is now exploring participating in NECC’s International Study Abroad short-course program to Italy this spring. During the three-week program, he will attend NECC classes in the morning and take classes at the Florence University of the Arts in the afternoon.

What has he learned as a result of his experiences?

“You definitely have to stay on your game when you take classes through Early College. Don’t over stress if you are feeling overwhelmed. Take a break, but then get right back at it.”

When Kelvin isn’t in class or studying, he can be found at Salvatore’s Restaurant where he works 20 hours a week. In addition, he was just hired at Marshall’s working no less than 18 hours a week.

In his free time he hopes the train to Boston and explores the city’s museums.

One day Sabando hopes to channel his creativity working as an interior designer.