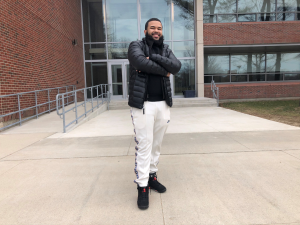 Jeurys Santiago is the founder of Minds with Purpose.

In his first semester at Northern Essex, business transfer major Jeurys Santiago attended a “Lunch and Learn” event, part of a series put on by the Center for Business and Accounting.

It changed everything for the 2017 Lawrence High School graduate.

He was inspired by fellow student Daniel Keating’s presentation. Keating sparked a flame in Santiago when he presented the idea that two major companies: Uber and Airbnb, had become extremely successful without owning their own vehicles or properties. Santiago, who considers himself an entrepreneur, thought about how he could replicate that business model to suit him and his goals. That’s how the idea for Minds With Purpose (MWP), Santiago’s self-made networking platform, came to be.

“What I like doing is helping people and connecting people with others who can help them achieve their goals,” said Santiago. He decided to create a networking platform where he could do that and also create a profitable business at the same time. The profits aren’t the bottom line for Santiago. In MWP’s first year, his plan is to focus on visibility and getting the word out.

MWP launched with an introduction video posted to Instagram on an account with less than 500 followers; the video was viewed over 2,000 times and shared 100 times in followers’ stories, said Santiago.

“I live in Lawrence and that’s a city that has a lot of violence and drug use, so when we put that video out we made a powerful statement, ‘we’re going to be the change we want to see,’” said Santiago.

The first MWP event, which premiered in December 2019, was a “giveback challenge,” reminiscent of the viral “ice bucket challenge” which promoted awareness of amyotrophic lateral sclerosis, or ALS. MWP’s “giveback challenge” encouraged followers to perform a good deed and repost it, tagging others to encourage them to do another good deed, and so on. It’s an ongoing challenge so Santiago’s hope is that people continue to share the message of giving back. MWP’s next event, “A Merry Christmas Giveaway,” held at the end of December 2019, supplied 60-70 people in need with all types of winter clothing.

“I started MWP to show people that the support you need is right in front of you, in your own community,” said Santiago. Santiago’s community is Lawrence and he noticed how many people around him were musicians, so he created “Music Mondays,” hosted by MWP, with the intent of giving local artists exposure in a sober setting to brighten up the first day of the week. The first event went very well, according to Santiago, and they were able to give the winner a substantial prize. Santiago’s goal is to have “Music Mondays” be a more regular event, and to expand it to other music scenes in nearby cities, they’re currently working on one for Haverhill. Eventually they plan to incorporate fashion shows and work with local, upcoming brands, models and designers, according to Santiago.

“Being here at NECC helped me,” said Santiago. He said he’s always had a business/entrepreneur mindset but that NECC provided him with resources he couldn’t get elsewhere and helped him learn how to network and use LinkedIn properly. “Sheila Muller helped me with a lot of connections. When I needed a venue, she connected me with someone she knew who operated a loft space in Lawrence,” said Santiago.

Santiago isn’t a new entrepreneur though, in his past he’s sold bracelets and hats out of his dad’s barber shop in New York City, and he sold Yu-Gi-Oh cards as a kid. Santiago runs MWP while also juggling five classes, but he attributes NECC with teaching him things like different marketing techniques. Economics class taught him about profits, and Intro to Business with Chuck Phair, explained entrepreneurship, solopreneurship, corporations, and nonprofits. Santiago says he’ll use the skills learned in Intro to Public Speaking in his business from now on.

Santiago’s ability to connect with people is what helps him be successful, he says. “There’s no losing in helping people in your community and I know that I can make a change in the cities around me.”

Eventually Santiago would like to create an app for MWP, and even further down the line, a paid membership model with one flat rate to attend all events.

MWP has been hit hard by the spread of Coronavirus and the ongoing closures of event spaces and social distancing since MWP is all about bringing people together said Santiago. Along with changing his business model, Santiago now has the added challenge of completing his degree online. Still, he’s keeping MWP alive with a new podcast called “Talks With Purpose” which will continue to give local artists and businesses exposure.