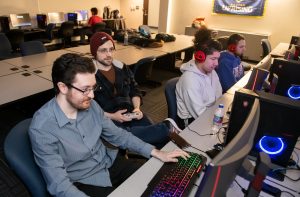 This photo of members of the NECC Esports team was taken before the college moved to remote learning due to the pandemic. Three members of the team will be competing from their homes Wed night in the Rocket League Championship.

College sports may be on hold due to the pandemic, but one of Northern Essex Community College’s Esports teams is still going strong.  The college’s Rocket League team has advanced to the NJCAAE Championship and will be competing against Snow College (UT) Wed evening, April 29 at 7 pm.   The match can be watched live.

In the semifinals, on April 22, they earned their right to advance to the finals with a 3-0 win over St. Clair County Community College (MI).

The college has also been competing in Super Smash Brothers during the pandemic.

“When the campus closed due to the virus we had to close our Esports Lab,” said Dan Blair, NECC Athletic Director.   “We were able to continue competing because some of our team members had access to computers at home and could play remotely.”

Northern Essex launched its Esports team in the fall of 2019 and opened an NECC Esports Lab in Room 103 in the B Building.   The lab includes 10 gaming computers and a projector and has become a gathering center for teammates, who practice their craft, work on their homework, and socialize.   The coach is David Arivella, a Northern Essex computer science alum who works as an academic technology assistant in the college’s library.

Esports is a rapidly growing varsity sport on college campuses. In the summer of 2016, just seven colleges and universities had varsity Esports programs. Today there are more than 170 programs and it continues to grow.  Northeastern recently announced that it is starting a varsity Esports program, the first Division 1 program in New England.