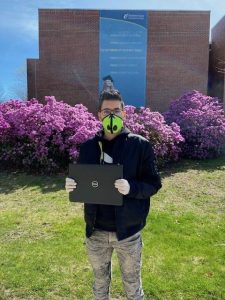 Vasil Zisi, recipient of the 2020 Outstanding Student Award, poses with his new Dell laptop, courtesy of the Alumni Association.

Haverhill resident Vasil Zisi is the latest recipient of the Outstanding Student Award, a selective honor granted to one high-achieving NECC student each year. Zisi was named for the award following several nominations and a selection of approval by members of the NECC Alumni Board.

A business transfer student, Zisi began his academic journey at NECC in the fall of 2018, after migrating to the U.S. from Albania. Since that time, he has won various accolades for his scholastic achievements and involvement in college service activities. He previously received an NECC merit scholarship award in the spring of 2019 and was nominated for the “29 Who Shine” award, a program that recognizes outstanding graduates from the commonwealth’s public higher education system. In addition, Zisi is a Student of the Month award winner, a nominated member of the National Society of Leadership and Success (NSLS), and a member of Alpha Beta Gamma. He will be graduating with high honors — and a near-perfect GPA —  this spring.

In a letter of recommendation, Patricia Machado, professor of economics, lauded his academic prowess.

“He is an excellent student with an exceptional work ethic,” she wrote. “Vasil was always prepared for class, contributed valuable discussion points regarding current events in economics, and was one of the top students in the class.”

Zisi will continue his studies at a four-year institution this fall, at which time he will pursue a bachelor’s degree in business with the ultimate goal of one day operating his own company. He has applied to a range of colleges and universities to date, including Suffolk, UMass Lowell, Babson, and Bentley, and has already received acceptances from several. Earlier this spring, he also got a head-start on his career journey through an accounting internship at Aphios Corporation, where he continues to work.

Upon receiving word of his win, Zisi was quick to express his gratitude.

“This award means a lot to me,” he said. “Coming from a small country like Albania and going to college in the United States was a different experience for me… Despite the difficulties that I had in the beginning with my English, the staff was very accepting of me and helpful when I had questions. This award means so much to me and my family because my hard work is being recognized.”

The Outstanding Student Award is distributed annually to one graduating NECC student who has exemplified exceptional commitment to community services initiatives and/or high academic achievement. The recipient must be nominated for the award and selected for approval by the NECC Alumni Board on behalf of the Alumni Association. The selected student receives a Dell laptop and an award certificate.