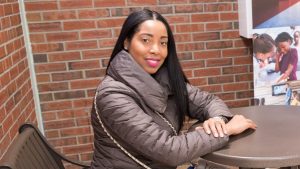 Public Health Major Rosanna Lara has been selected as this year’s Student Speaker for Commencement.

Public Health Major Rosanna Lara has had more than her share of challenges while pursuing her education, and she hopes that those challenges—and her ability to persevere— will help her in her chosen career.

The wife and mother of three young children, ages 5, 7, and 10, was selected as the student speaker for Northern Essex Community College’s 2020 Commencement, which was virtual.

When the speaker scheduled to speak at the 2021 Liberal Arts Ceremony had to drop out for personal reasons, Lara agreed to step in with less than a day’s notice.

Since earning her degree in 2020, Lara has been hired as the college’s contract tracer case manager, supporting the COVID-19 team with testing, vaccination clinics, case management, and communication.

Lara plans to continue her studies at Regis, which offers a bachelor degree completion program in Lawrence, and her long term goal is to earn a master’s in public health and eventually become a medical and health services manager at an urban hospital.

Job Lay Off as Silver Lining

Lara, a Lawrence resident, arrived at Northern Essex in 2017, when her employer, along with her customer service job, moved to the West Coast.

“Sometimes things happen for a reason.   God has something else in mind,” explains Lara.  “Public health feels like me.   I want to do outreach, work with my community to promote wellness.”

Things got complicated for the already busy Lara when her mother moved from the Dominican Republic into their Lawrence home in the fall of 2018.

Shortly after arriving, Lara discovered that her mother had serious health issues, which led to a month and a half stay in a Boston hospital and months in a Boston area rehab.  During that time, Lara was her mother’s primary caregiver, balancing her family responsibilities and schoolwork with daily trips to Boston.

Advocating for her mother, Lara learned first-hand how challenging it can be to navigate the health care system, especially with her mother’s limited resources and lack of English language skills.

The experience was stressful but it confirmed Lara’s interest in public health.

The Public Health Program is a two-year associate degree program which includes an internship.   Lara’s has had two internships, the first with the YWCA of Northeastern Massachusetts-Fina House, a home for vulnerable women and their children, and a second with ACT Lawrence, a nonprofit that promotes financial capability, community engagement, and personal growth for low to moderate income populations in Lawrence.

Lara was one of the first to volunteer when Governor Baker announced his Academic Public Health Volunteer Corps, a team of volunteers, helping track and slow the spread of CVOD-19.  Lara spent seven days a week reaching out to individuals who have tested positive.   After getting answers to a series of questions, she called the individual’s contacts to make sure they are following the proper protocol.  All of the information she gathered was submitted to the state and used to track the virus.

Lara is transferring to Regis North, which offers a bachelor’s degree completion program in public health in Lawrence on Northern Essex’s campus.   After she earns her bachelor’s, she plans to go on for an online Master’s of Public Health, also offered through Regis.  While continuing her education, Lara hopes to secure internships at a local hospital, where she can begin to help clients manage their health care, especially clients who are Spanish speaking. Her ultimate goal is to be a medical and health services manager for an urban hospital or the Center for Disease Control (CDC), which will require a graduate degree.

A straight A student, Lara participated in the Pathways to Academic and Career Excellence (PACE) Program, a federally funded support program for first-generation college students; was a member of Phi Theta Kappa, a national community college honorary society; and was on the executive board for NECC Chapter of The National Society of Leadership and Success (NSLS).  She also has worked to support herself and her family as an Uber Eats driver.

She was selected for the Department of Higher Education’s 29 Who Shine, which recognizes the top student from each of the commonwealth’s public community colleges, state colleges, and state universities.