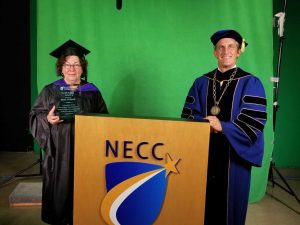 President Lane Glenn presented the college’s Social Justice Award to Paula Richards of Salisbury, professor of academic ESL and English, at the college’s virtual commencement ceremony for the class of 2020.

Created last year, the award recognizes individuals, groups, departments, and initiatives that promote values such as a commitment to equity and diversity or the advancement of human rights and social justice. It comes with a cash prize of $1961—in honor of the year the college was founded—that the recipient can use to enhance social justice initiatives at the college.

Richards was nominated for the award by the college’s ESL faculty based on two initiatives she has led: the ESL Fusion Pathway for ESL learners and Service Learning.

The ESL Fusion Pathway, which Richards implemented at NECC based on a model created at the Community College of Baltimore County, gives English Language Learners the opportunity to progress in their education more quickly.

Up until the pathway was started in 2013, English Language Learners had to complete their Academic ESL courses before enrolling in English Composition I. With the new model, students can take their last ESL writing course concurrently with English Composition I, saving time and money.

Richards is also responsible for championing Service Learning at Northern Essex, which gives students the opportunity to participate in service projects that are connected to what they’re studying in the classroom.

In her ESL and linked ENG101 classrooms, students have collaboratively engaged in projects that address community needs, such as housing and food insecurity.

She says one of the most rewarding service learning projects was the biographical interviews her students conducted with seniors in assisted living facilities. “These interviews re-affirmed for them that this country is indeed a national of immigrants, and that they are not alone in this experience.”

After seeing how well these projects worked for her own students, Richards became a leading advocate for service-learning college-wide, developing a Blackboard training course for faculty.

In announcing the award, President Glenn said “Paula, because of your creativity in introducing new practices that promote equity and your commitment to engaging your students in service in their communities, it is my great pleasure to present you with the 2020 Northern Essex Community College Social Justice Award.”

Here’s a video of Richards accepting the award.