Music Grad Selected to Sing at DHE “29 Who Shine” Event 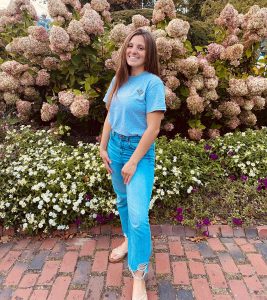 There is one thing Northern Essex music major Alicia Catalano always knew she wanted to do. “All I ever wanted to be was a singer, music is my passion,” she says. She started a band with her brother when they were just teens, and they played in and around their hometown of Newburyport. They even opened up for jazz-rock band Blood, Sweat and Tears.

When it came time to decide what to do after graduating from Whittier Tech in culinary in 2018, where she served as class president, Catalano found herself at a crossroads. She wanted to explore college, but didn’t want to totally uproot her life. “I was super confused; music was the only thing I wanted to do. And I thought, you don’t have to go to school to be a musician,” she remembers. Catalano says NECC provided the perfect solution. “I still feel like I’m in limbo, I’m not really sure what I want to do in life. But going to NECC has given me that time and opportunity to explore in an affordable way.”

Catalano, who performs under the name Alicia Malana, has certainly made the most out of her time at NECC. She just released her first single called “Forgive” and she has been selected to perform for the Department of Higher Education’s “29 Who Shine Awards” in May, an event hosted by Governor Charlie Baker and honoring a top graduate from each community college, state college and university in Massachusetts.

This spring, Alicia Catalano will graduate with her associate’s degree in music, and in the fall she will earn another associate’s degree in business. NECC’s General Music degree gives students the skills for a variety of careers in performing, teaching, sound engineering and much more. Credits also transfer to a number of bachelor’s degree programs at four-year schools.

When she’s not performing, creating music, or studying, she is busy designing a line of bags called “By Alicia” which she markets online. Catalano says her degrees will help her continue to pursue her passions, while figuring out her next step. “I will say to my mom I feel like I’m behind, because it took me three years instead of two or two and a half to get my associate’s degrees. And she’ll say,  ‘You’re not behind, you’re figuring it out at a different pace.’”

This story was written by Melissa Bouse.