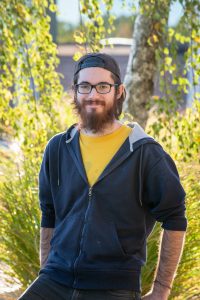 Northern Essex Community College journalism/communications student Andrew Venditti of Haverhill is taking his passion for advocacy to a new level. He’s been selected as this year’s Newman Civic Fellow for his role as a leader on and off campus.

Like many students who start at NECC, his road to get to this point has had a few twists and turns- perhaps none more dramatic than what happened in his Western Civilizations class.

“It was during that class that I woke up on the floor surrounded by curious eyes, and with a pounding headache.”

It turned out, Venditti, a 2017 Whittier Tech grad, had a non-cancerous brain tumor, which required surgery and a significant recovery. While it was a scary and difficult experience, it also increased his awareness about issues of equality and access. “That ties into the classes I’m taking and my civic engagement because it changed my perspective on the way that I view things. As a 20-year-old, you feel invincible. That slapped me in the face. Because I wasn’t invincible and nobody else is…It was humbling and eye opening. If my mom hadn’t had good health insurance I would have just had to be in debt for potentially a long part of my life. And that’s definitely informed the way that I look at the world and what I want to do,” he says.

Venditti wasted no time turning his awareness into action. He is the president of NECC’s Students for a Democratic Society Club and Amnesty International; he is one of the college’s student ambassadors, helping students with online learning; and he has participated in the Massachusetts College Advocacy Day. In his nomination letter for the Newman Civic Fellowship, NECC President Lane Glenn notes that “He (Andrew) is not afraid to start conversations and inspires others to engage in dialogue on challenging subjects, which is vital to create a healthy democracy. Andrew combines intellect with empathy in such a way to be a role model for others.”

The Newman Civic Fellowships are part of the Campus Compact, a national coalition of colleges and universities committed to the public purposes of higher education. Named for Campus Compact founder Frank Newman, the fellowships recognize and support community-committed students who are change makers and public problem-solvers. Fellows are nominated by their president or chancellor on the basis of their potential for public leadership and participate in a year-long program that helps them nurture their assets and passions and develop strategies for social change.

Venditti graduated from Whittier Tech with a concentration in electronics. His original plan was to take classes at NECC to work toward becoming an engineer. But professor and Dean of Liberal Arts Amy Callahan recognized a different set of talents while he was presenting about net neutrality during public speaking class. “She could tell I was enthusiastic about that subject. She went out of her way to take me aside and asked me ‘do you want to do this because I think you’d be a great [journalism] major?’ And that changed the direction of my life.”

Now, Venditti  is using his advocacy skills and empathy to tell stories for those who are often unrepresented. You can read some of his work in the student newspaper “The Observer.” He is also the treasurer for the campus improv group and a musician. He plays guitar in his band, Everything in Green, which he founded with a fellow NECC student he met while riding the campus bus after his brain surgery. Venditti is on track to graduate next spring and then he plans to work for City Year in Boston, which supports children in public schools. “I’m hoping to be able to work with people who are like-minded, who want to facilitate change.”