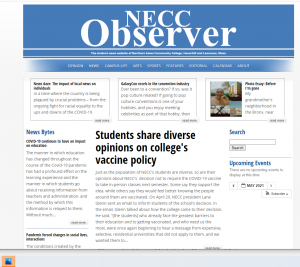 Despite the challenges of the pandemic, Northern Essex Community College’s student newspaper, the NECC Observer, received a gold medal from the Columbia Scholastic Press Association for the 2019-2020 school year. The newspaper had the additional distinction of All Columbia Honors for receiving an exceptionally high judging score.

The NECC Observer is a consistently award-winning student newspaper, but the award feels particularly impactful this year.

Even after their lives were upended in March 2020, NECC’s student journalists remained dedicated to the Observer as they covered the pandemic’s effect on NECC students and faculty. They also seamlessly shifted from producing a print newspaper to one that’s online only, driving home the importance of student journalism, especially during times of crisis.

“I was really impressed with how the students were able to just keep doing it,” says Mary Jo Shafer, advisor for the NECC Observer and adjunct journalism and English instructor.

Even though they weren’t on campus—and had to deal with the pressure of suddenly having to navigate a new world of balancing online learning with the rigors of college courses—the student journalists continued to find topics, interview sources, and write stories.

They were able to “persevere even with all the stresses of that semester,” says Shafer.

They also pivoted in the kinds of stories they were covering. At the beginning of the school year, Shafer says the NECC Observer staff and contributors were already doing a great job covering events and other campus happenings. Then, at the onset of the pandemic, they switched gears, covering what was happening in a different way.

“I was really impressed with a lot of the stories they did about coping with online learning, and coping with the pandemic, and that sort of thing,” Shafer says.

That experience is a testament to Shafer’s belief that working on a student newspaper is one of the best ways for students who are passionate about journalism to get real, hands-on experience in the field. Working on the Observer is a labor of love that doesn’t earn students course credit, but often provides something else that’s just as valuable.

“I really believe in journalism being a craft that you learn best by doing it,” she says. And awards like the gold medal from the Columbia Scholastic Press Association are the icing on the cake.

“It’s a nice acknowledgement of their hard work and their persistence,” Shafer says.

The NECC Observer is an award-winning newspaper published by NECC journalism students. The Observer is published twice monthly during the academic year.

The Observer is a member of the Associated Collegiate Press and the New England Press Association.

To learn more about NECC’s Journalism/Communications program visit the website or reach out to admissions@necc.mass.edu, 978 556-3700.

This story was written by Alex Pecci.