She Arrived in the U.S. with a Suitcase and a Dream 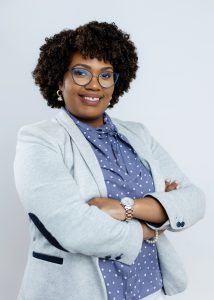 Paola Sierra de Valerio of Lawrence has been selected as the Center for Health Professions Student Speaker.

As a girl, growing up in the Dominican Republic, Paola Sierra de Valerio, now a resident of Lawrence, dreamed of graduating from college in the U.S. one day.

On May 15, she will fulfill that dream when she receives her Associate Degree in General Studies: Health Specialization from Northern Essex Community College.

Sierra has been selected to share her story—one that she hopes will inspire other immigrants—as the student speaker for the Center for Health Professions May 15 Commencement Ceremony.

In nominating her for this honor, Sheila Corsaro, academic advisor for the college’s PACE Program, a federally funded support program for first generation college students, wrote “Paola is truly one of the most dedicated students I have ever known.”

Hearing her story, it would be hard to disagree. While working to support herself, learning the English language, becoming a U.S. citizen, and falling in love and getting married, Sierra never lost sight of her educational goal.

She graduated from high school in the Dominican Republic in 2009 and moved with her family to Spain, where she studied English.

Still holding on to her dream, she boarded a plane in 2014 headed for Miami. “I came with just my luggage and myself,” she says.

After a stay in New York, where she met her future husband, the couple moved to Lawrence in 2016.

It hasn’t been an easy journey, but Sierra wants others, especially other immigrants, to know that it is possible.

“When immigrants come to this country, the first thing they do is go to work. Learning English and further education are often forgotten,” she says. “I never lost my determination to learn and graduate.”

Soon after arriving in Lawrence, Sierra enrolled in Northern Essex’s Bridges to College and Careers program, a grant-funded program that provides a pathway for adult English language learners who want to attend college.

It was in the Bridges to Colleges and Careers Program that Sierra discovered her interest in health care and began to form an education and career path.

When Sierra addresses, the graduates on May 15, her husband and her mother’s friend will be in the audience cheering her on, while the rest of her family watches the livestream from Spain.

This year, due to the pandemic, Northern Essex Community College is holding five smaller graduation ceremonies on Saturday, May 15 on the Haverhill Campus, organized by academic center. Each ceremony will include a student speaker and traditional awards will be presented throughout the day. Students will have the opportunity to cross the commencement stage and receive their well-earned associate degree or certificate.