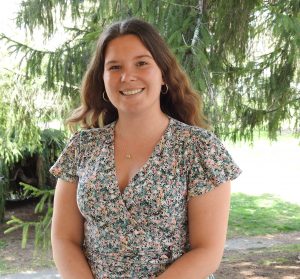 Shanna Guy of Newburyport has been selected to be the student speaker at the Center for Business and Accounting Graduation Ceremony.

Shanna Guy’s first attempt at college didn’t work out well, but she has certainly redeemed herself the second time around.

She enrolled at Northern Essex after graduating from Amesbury High School in 2011, but flunked out after two semesters, which she attributes to the 40 to 60 hours a week she spent waitressing and her young age.

The Newburyport resident is graduating from Northern Essex Community College with an Associate Degree in Business Transfer and a 3.70 GPA on May 15, and she’s been selected by her business and accounting professors as the student speaker for Center for Business & Accounting graduates, based on her academic success and leadership skills.

“I just didn’t know myself; my sense of responsibility was different,” she says, when explaining her first college experience.

Over the summer of 2018, after waitressing at Pat’s Diner in Salisbury on and off for 14 years, starting at the age of 12, she was ready for a change and enrolled in one course at Northern Essex. “I wanted to take it slow. I was determined to finish what I started,” she says.

Once she passed English, a course she had failed twice in the past, she was well on her way. “It gave me a sense of confidence. This was my time to do it right.”

And do it right she did. She soon enrolled full time, using the money she had saved over her years waitressing, to support herself while she focused on school.

While at Northern Essex, Guy was actively involved in Alpha Beta Gamma, an honors society for community college business majors, serving as president of the college’s chapter.

In the fall, Guy plans to transfer and continue her business studies at either Merrimack College or UMass Lowell, where her mother is a Public Health professor.

She loves math, so accounting may be in her future, but, as a peer tutor, she’s also discovered that she gets a great deal of satisfaction from helping people learn.

“It would help make me the happiest person in the world if my future job gave me the chance to help others grow into the best version of themselves,” she says.

Guy’s story proves that failure can have a happy ending.

Since she made the decision to enroll at Northern Essex for the second time, Guy says her whole life has turned around. “I never would have thought I would be here. I had no idea of the opportunities I would find myself in.”

This year, due to the pandemic, Northern Essex Community College is holding five smaller graduation ceremonies on Saturday, May 15 on the Haverhill Campus, organized by academic center. Each ceremony will include a student speaker and traditional awards will be presented throughout the day. Students will have the opportunity to cross the commencement stage and receive their well-earned associate degree or certificate.