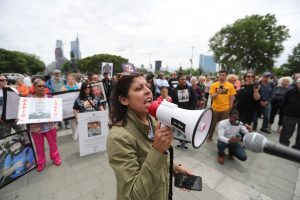 Helen Ubiñas ’91 at her Fill the Steps Against Gun Violence event, held annually at the Philadelphia Museum of Art.

There are close to 1,100 community colleges in the U.S. and tens of millions of community college alumni. That’s why it’s so exciting that a Northern Essex alum—Helen Ubiñas ‘91—is one of only three to receive the American Association of Community College’s (AACC) 2021 Outstanding Alumni Award.

Now a columnist for the Philadelphia Inquirer, Ubiñas’ journalism path started at Northern Essex where she was editor of the Observer, the college’s award-winning student newspaper.

At the Hartford Courant, from 1994 to 2011, she was named the first Latina news columnist, and she also received numerous awards including a team Pulitzer Prize for coverage of a murder/suicide at the Connecticut State Lottery.

In 2012, she was hired as a columnist for the Philadelphia Inquirer and Philadelphia Daily News, where she focuses on issues of race, politics, and, most notably, gun violence. There, she has also received many honors, including the Sally Kalson Courage in Journalism Award, which is presented by the Pittsburgh Foundation and recognizes a Pennsylvania broadcast, print, or online journalist whose work demonstrates “fearlessness, fortitude, and excellence.”

In addition to her associate degree in journalism/communications, she has a bachelor’s from Boston University and a master’s from Trinity College (CT)

Ubiñas was nominated for the AACC award by Northern Essex President Lane Glenn, who introduced her at the AACC Annual Conference which was held virtually earlier this month.

Here’s a link to the presentation.

Ubiñas has been a champion for community colleges and it was a pleasure to speak with her about her experiences here and her career.

What brought you to NECC?

My parents always stressed education, but as a first-generation college student I wasn’t prepared past making it through the front door…I struggled at the first college I attended and eventually gave up, opting to work full-time in a number of jobs until I could figure out how to mentally and financially prepare to return to school. I turned to NECC – again, not fully knowing what to expect, but hoping that a community college might be a more nurturing and manageable space for first-gen students. NECC was that, and so much more. (I met my husband Michael Dunne ’91 there) I also made great friends, and discovered my passion for journalism at the school paper, with the help of a great adviser and crew at the Observer.

Which faculty or staff member had the greatest influence on you and why?

Hands down, Mr. LeBlanc, the Observer’s adviser. I hope he knows how much his belief in me and my work meant to me back then, and now. I don’t think I would have pursued a career in journalism if I hadn’t had a college professor who told me I was good enough. I believed him, and I cannot stress enough how many students need someone to believe in them in order for them to believe in themselves.

What did you appreciate most about NECC, and why?

The community of students and staff… I loved how diverse the backgrounds and experiences were — from different generations to different countries and everything in between. I met fellow first-generation college students who shared my experiences, but also parents and grandparents who had put their own kids through school and were now pursuing their own degrees, retired and active military service members and a host of others who only cemented my desire to push for diversity and inclusion in whatever space I was in, including newsrooms.

When did you decide you wanted to be a journalist?

I always knew I wanted to write. But it wasn’t until I joined NECC’s school newspaper, the Observer, that I could really see myself becoming a journalist… Every time we put out an edition and I saw my byline above a story that I worked hard on, I remember thinking: I can do this. 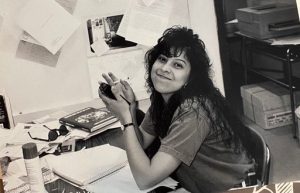 Which career accomplishment has given you the greatest satisfaction?

What drives your commitment to social justice?

I’ve always had a deep sense of fairness and a desire to do whatever I could to make things right and just. In many ways, it’s the very least we should do for one another. We all have a voice and an ability, and frankly, an obligation to help make the world better for everyone. What’s more important than that?