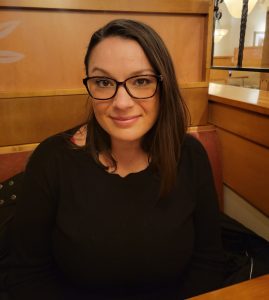 Chrissy Grace of Dracut, newly elected student representative on the NECC Board of Trustees

Human Services major Chrissy Grace of Dracut will join the Northern Essex Community College Board of Trustees as the newly student-elected representative.

Grace graduated from high school in 2004 and quickly found success working in the tech field as a product representative. But, after having her daughter three years ago, she felt like she was out of options for growth in her career. Grace decided to move back home and work for her family’s transportation business. Then, COVID hit, and work ground to a halt. Grace once again found herself reevaluating. “I found myself alone with nothing to do. I wanted to fill my time with something positive.”

Grace decided to enroll at NECC for the Spring ’21 semester as a Human Services major. She says she was inspired to take on this new challenge by seeing her young daughter adapt and  thrive during the pandemic. “She is three, she has spent most of her life in COVID and if she can do it, I can do it.”

Despite being fully remote, Grace was determined to embrace all aspects of college life. She joined the Community Outreach Group and became the member at large for the Student Government Association. Even though they couldn’t meet in person, she felt really motivated by the sense of community she gained from these clubs. “Suddenly it was like I had a purpose; I think that’s really important.” Grace says, as more students return to campus in the fall, she hopes that she can use her role as student trustee to encourage others to get involved. “Those of us who found something we were passionate about had a much better experience. Helping bring back a sense of community is going to be really important going forward.”

Grace finished her first semester with a 4.0 grade point average. After earning her associate degree, she plans to transfer to a four-year school to get her bachelor’s and then go onto work with senior citizens.

NECC’s Human Services Associate Degree program prepares students for a career working with people with emotional and social problems, developmental disabilities, mental illness, or substance abuse problems. The program offers a wide variety of career options in a field that is expected to continue to be in high demand.

The NECC Board of Trustees includes nine members who are appointed by the governor of the state to a maximum of two five-year terms as well as an alumni-elected member, who also serves a maximum of ten years, and a student trustee who serves for two semesters. Grace’s term will last through June 30, 2022.

2021 Northern Essex Community College Biology Graduate Mariel Blouse was in the spotlight on Tuesday, June 1, when she received honors for her academic success from the Lawrence City Council, which…
More articles »

Joshua Stokel of Portsmouth, NH, a retired deputy chief of police with extensive experience teaching criminal justice at the college level, has been appointed director of the…
More articles »