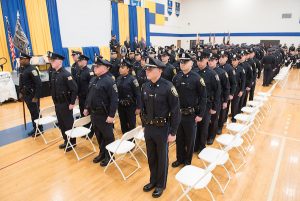 Haverhill and Lawrence, MA (November 9, 2021)-All Northern Essex Community College Police Academy student officers will now complete an eight-hour national training module that prepares them to intervene if a fellow officer is involved in misconduct.

The college’s academy is the first municipal police academy and the first community college in Massachusetts to be accepted into Georgetown University Law Center’s Active Bystandership for Law Enforcement (Able) Project, a national training and support initiative committed to building a culture of peer intervention that prevents harm. The ABLE Project was created in 2020.

“We feel this training is important because if we are going to see true progress in terms of police reform, it must start at the academy level,” said Joshua Stokel, director of NECC’s police academy.

According to Stokel, ABLE is focused on three pillars: Reducing Mistakes, Preventing Misconduct, and Promoting Health and Wellness. “They lay the groundwork for evolving dynamics associated with modern policing strategies.”

The college joins more than 300 other law enforcement agencies and statewide and regional training academies from across the country and in Canada that have been accepted into the ABLE Project. That includes the New Hampshire and Massachusetts state police, the Boston and Lawrence police departments, and the NH Police Academy.

To be accepted to the program, Stokel submitted four letters of support on behalf of NECC’s academy and become certified to teach the curriculum by completing the ABLE Train-the-Trainer program.  The academy has partnered with instructors from the Lawrence Police Department to deliver the ABLE curriculum to all recruit classes.

According to the ABLE Project website, the program “is evidence-based and founded upon decades of research, field and lab experiments, and on-the-ground experience…officers are trained in how to give an intervention, how to receive an intervention, and how to follow up on the intervention to prevent future harm.”

ABLE also ensures that law enforcement officers learn strategies that are effective to avoid any biases in policing towards communities that are affected by prejudice and ineffective policing.

Jonathan Aronie, an attorney and chair of the ABLE Project Board of Advisors, explains, “Intervening in another’s action is harder than it looks after the fact, but it’s a skill we all can learn. And, frankly, it’s a skill we all need—police and non-police. ABLE teaches that skill.”

The Northern Essex Police Academy has graduated 11 classes since its inception in January of 2015. To date, over 500 student officers have graduated from the academy, serving over 70 municipal police departments, eight colleges and universities, Massachusetts Port Authority, and the Somerville Housing Authority. The next class will graduate in November and a new class will start in January, 2022.

All the graduates complete an intensive 24-week program that includes constitutional law, domestic violence, elder abuse communication and problem solving skills, and response to citizens on the autism spectrum. Active Bystander for Law Enforcement (ABLE) training, which prepares officers to successfully intervene when they see other officers engaging in misconduct, was recently added to the curriculum. The recruits undergo 900 hours of training, defensive driving, daily physical fitness training, and firearms training. All training takes place on the Haverhill Campus except for firearms training and emergency driving techniques, which are held, at off-campus locations.

Northern Essex manages the academy with guidance from an advisory board that includes police chiefs from Amesbury, Haverhill, Methuen, Lawrence, and North Andover.

To learn more about the academy, contact Stokel at jstokel@necc.mass.edu.