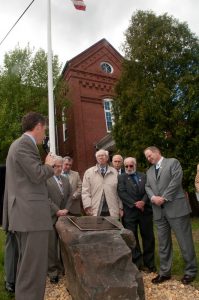 In April of 2012, as part of the college’s 50th anniversary, NECC dedicated a plaque at the Greenleaf School, marking where the college got its start.

When Maurice Viscuso graduated from Lawrence’s Central Catholic High School in 1961, he considered enrolling at Merrimack College, but decided to take a chance with Northern Essex, which was opening its doors that fall at the former Greenleaf Elementary School.

Viscuso wanted to stay close to home and at $100 a semester the new community college—the fourth to be established in Massachusetts—seemed like a great bet. 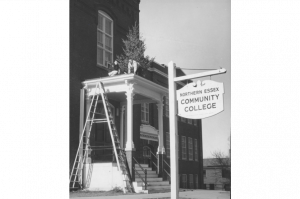 The Greenleaf School as it looked in the 1960’s when it was the NECC Campus.

One of 181 students in the first class, Viscuso said he met students from all over the Merrimack Valley and the North Shore. “It’s the people I remember. We always had a lot of fun. Lots of get-togethers…it was always wonderful.”

Now living in Arizona, after retiring from a career that included 20 years as the head of corporate training for the Marriott Corporation, Viscuso couldn’t be happier with his decision.

He enjoys reminiscing about the lifelong friends he made, including his best friend Arnold Kaplan, now deceased, who was president of the class of 1963, and went on to teach at Brookline (MA) High School.

Viscuso credits Northern Essex with the beginning of everything he achieved in life. “Northern Essex gave me the opportunity to start my education, and from there it was up and up. A bachelor’s, a master’s, advanced graduate studies, and a rewarding career that I loved.”

After its humble start, the college grew rapidly. Courses continued to be offered at the former Greenleaf Elementary School, as other temporary sites were added: the Grange, the People’s Methodist Church, the Hellenic Orthodox Church, and the former Haverhill High School (now home to city hall).

When the state was looking for a permanent campus for the college in Haverhill, three sites were considered one in the Mount Washington area, a second near Salem Street in the Bradford section, and the third, which was selected, Hunkin’s Hill, described by John Spurk in his history of the college as “adjacent to Kenoza Lake, a parcel of exquisite natural beauty just off Interstate 495.”

In 1965, to commemorate its 325th anniversary, the City of Haverhill donated the 110-acre parcel of land to the state to build the Haverhill Campus.

Construction of the campus started in 1967 and it was scheduled to be completed in October of 1971, but, with 2300 students enrolled for the fall semester, the college had outgrown its temporary space and needed to open the campus that fall, ready or not.

On the first day of classes, September 15, 1971, a traffic jam formed on rt. 110. There were four buildings open that day: the Sport and Fitness Center, the Applied Science Building, the Science Building, and the Classroom Building (Now Spurk). Over the years, other buildings were added: the library was completed that November, followed by the maintenance building (1972), the college center (now the Behrakis Student Center, 1973) and the Hartleb Technology Center (2005). In 2020, Northern Essex opened the NECC Lupoli Institute of Culinary Arts on Merrimack Street in downtown Haverhill. 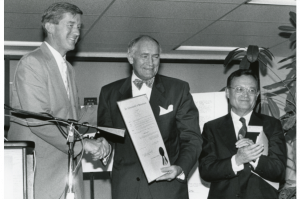 Governor William Weld; Ronald Barbaro president, the Prudential Insurance Company of America; and NECC President John Dimitry at the May 16, 1991 opening of the college’s first permanent building in Lawrence, now the Dimitry Building.

At the same time the Haverhill Campus was opening, the college was also expanding into Lawrence, offering its first courses in the city. Over the next 20 years, the college served thousands of students in over a dozen sites in the city including the Lawrence Public Library, Central Catholic High School, Grace Episcopal Church, the Lawrence Vocational School, Lawrence High School, and a number of elementary and secondary school sites. Classes were also taught just over the city line at the Greater Lawrence Technical School in Andover.

Recognizing the need for a permanent campus in the city, the state legislature passed a capital outlay bill in 1988 which included $18 million for purchase or construction of a Lawrence Campus.

That’s when Ignatius Cataldo, a Lawrence native and Prudential Insurance executive, approached the college about donating a 68,000 square foot building located at 45 Franklin Street to the state for a Lawrence Campus.

Using state funds, the former insurance building was fully renovated, creating space for classrooms, a computer center, and science laboratories. Some of the college’s most popular programs, health professions and criminal justice, were re-located to Lawrence.

That building opened to great fanfare on May 16, 1991, in a ceremony attended by Ronald Barbaro, who was then president of The Prudential Insurance Company of America and William F. Weld, then Governor of Massachusetts.

To learn more about the college’s Anniversary Celebration, visit www.necc.mass.edu/anniversary