Haverhill, MA (May 25, 2022) – Northern Essex Community College’s student newspaper, the NECC Observer, was awarded a gold medal from the Columbia Scholastic Press Association for work published during the 2020-2021 school year. During this time the student newspaper did not have a print edition because of the pandemic and stories were posted solely to the website.

The judges wrote that the Observer should be proud of what the staff accomplished under such difficult circumstances during the pandemic. 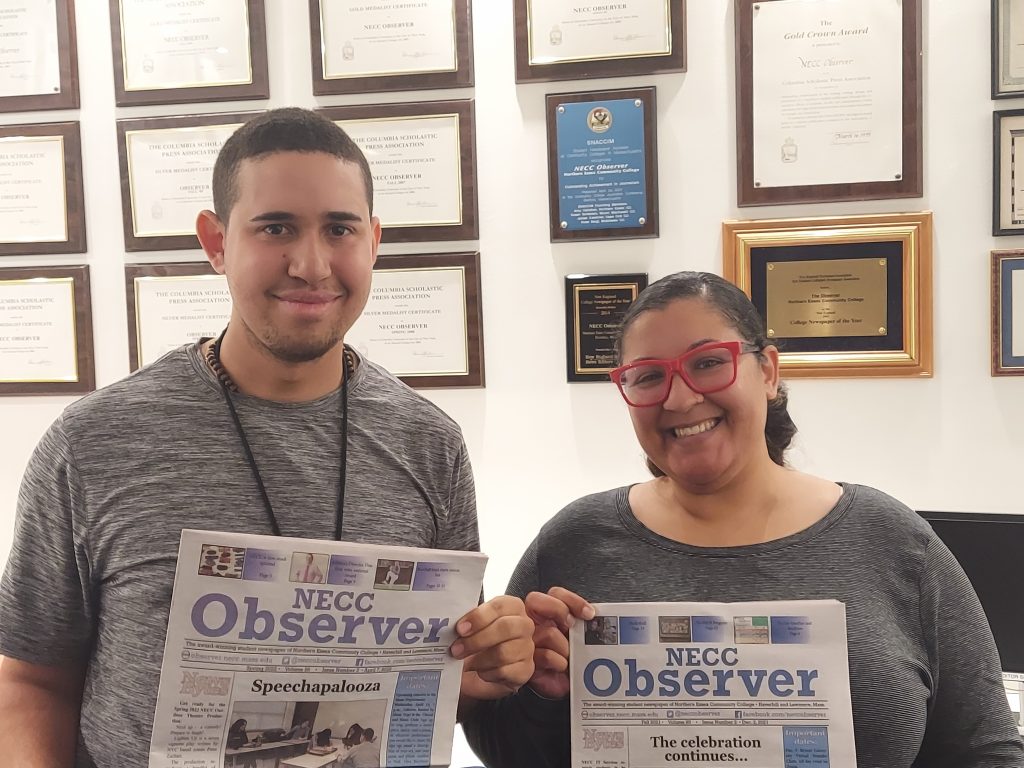 The Observer was also awarded a gold medal for its work during the 2019-2020 school year, when it was also all online. The newspaper had the additional distinction of All Columbia Honors for receiving an exceptionally high judging score that year.

The NECC Observer is a consistently award-winning student newspaper, but the award feels particularly impactful during the pandemic.

Faculty adviser Mary Jo Shafer says she is proud of all the students who contributed to the Observer, especially former Editor-in-Chief Isa Grullon of Lawrence. Grullon is now pursuing her bachelor’s degree at UMass Boston.

The NECC Observer is an award-winning newspaper published by NECC journalism students.

To learn more about NECC’s Journalism/Communications program visit the website or reach out to admissions@necc.mass.edu, 978 556-3700.

When Sarah Pachano of Lawrence learned she would be joining the Northern Essex Community College Board of Trustees as the newly student-elected representative, she got to work immediately. The philosophy major seized every opportunity to talk to fellow students and…
More articles »

Haverhill, MA (June 17, 2022) – A year after the pandemic relegated it to the digital realm, Northern Essex Community College’s award-winning literary magazine, Parnassus, will be back in print. “We are so happy to once again offer a paper-and-ink…
More articles »

Haverhill, MA (June 8, 2022) - Following the success of May's event, Northern Essex Community College is hosting a second Explore NECC Open House. The event is scheduled for June 22, from 5 to 7 pm on the Haverhill Campus.…
More articles »