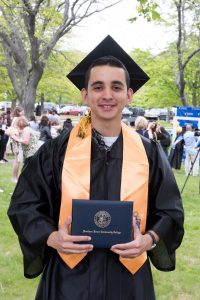 When Anthony Delgado walked across the Northern Essex Community College stage to accept his Associate in Arts Liberal Arts degree with high honors, he carried with him two languages, two cultures, and the determination that comes with struggling to assimilate to both.

The 20-year-old Lawrence resident is off to Cornell College in Iowa in the fall where he will work toward a bachelor’s degree in math. He was one of more than 1,000 graduates to receive associate degrees of certificates during the 54th annual NECC commencement exercise on Saturday, May 21.

Born in the Dominican Republic, Delgado was six-years-old when his family moved to Lawrence. Unable to speak English, he was often reduced to tears in his first-grade classroom and his older brother would be called down to help calm his fears. Within a year, he was speaking English fluently and became an honors student.

At the end of his eighth-grade year, his family returned to the Dominican Republic to live. The little boy who couldn’t speak English found himself in his homeland unable to read, write, or speak Spanish. And to compound matters, all his assignments required cursive writing which he never learned. The A-student found himself struggling to pass his high school courses.

While the language barrier once again slowed Delgado down, it couldn’t stop him. He graduated as the valedictorian of his senior class from the small private, Catholic high school he attended, a school he credits with teaching him discipline and time management.

After graduating from high school, Delgado didn’t hesitate to return to the United States to join his older brother in Lawrence. For six months he worked three jobs and reconnected with his English language skills.

Delgado enrolled in Northern Essex’s liberal arts: math program thinking he might eventually want to pursue a degree in architecture. He was a full-time student and worked full time as a manager at an area McDonald’s Restaurant. He has since decided to study math exclusively.

As the child of parents who never earned a high school diploma, Delgado says it is an honor for his family that he is a first-generation college student and as such, has participated in Northern Essex’s Pathways to Academic and Career Excellence (PACE) Program where he attends weekly workshops, events, and college tours.

Northern Essex, Delgado says, has been a “good testing ground” for him to explore and discover his likes and dislikes. He maintained a 4.0 GPA while doing it.

When he wasn’t in class, or working, or attending PACE events, Delgado had time to join the Phi Theta Kappa Honor Society, the Community Outreach Group which raised money for various nonprofits including Emmaus House, the Massachusetts Society for the Prevention of Cruelty to Animals (MSPCA).

“That was my way of giving back to the community that gave me so much,” he said. “It was my duty.”

Eventually Delgado would like to work in the renewable energy industry.

He says his bilingual, bi-cultural foundation should serve him well in the years to come.

“I have had to learn to assimilate well,” he said. “I’ve learned you can’t have restrictive thoughts. It has made me more analytical and more humble.”