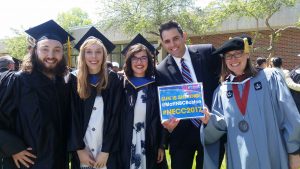 When Northern Essex Community College journalism/communications student Cleo Brigham had the opportunity to meet NBC Boston chief meteorologist Matt Noyes, a Haverhill resident, at commencement last year, she shared that she would be looking for an internship.

Noyes, who was the 2017 commencement speaker, suggested Brigham send him her writing samples and her resume, which she quickly followed up on.

That brief encounter led to an internship this semester with NBC Boston’s Special Investigation Unit, an experience that has helped shaped Brigham’s career plans.

“I used to think I wanted to be in print, but this has opened me up to the video side of the field,” says Brigham, a former editor of the Observer, NECC’s student newspaper.  “It’s important to be versatile, the more skills you have the more valuable you are.” 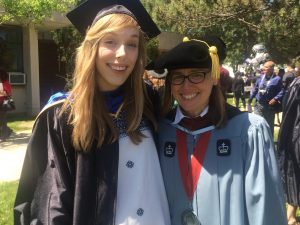 As one of two interns in her department, Brigham has a variety of responsibilities.  A lot of her work has been with “NBC Boston Responds”, which handles the concerns of consumers.  Viewers submit consumer complaints and Brigham researches those complaints and transcribes broadcast interviews, pulling key quotes and important facts for the reporters.

“In broadcast, you can’t tell everything.  I go through the interview footage, which can be up to a half hour in length, and get the reporters everything they need to write the story.”

She says one of the most exciting aspects of her internship is going on shoots with the reporters and camerapersons.  “I get to go in the field, watch the interviews, and see how they set up.”  So far, she has assisted with two lifestyle shoots, one on a new restaurant located in Salem, MA, and the second on a new boutique fitness center on Newbury St. in Boston.

It may seem like this opportunity fell into her lap, but landing this internship took persistence, she says.  “When I met Matt, I thought this was meant to be,” she says.  “But it took a month and a half to hear back, and I got discouraged.”  Noyes emailed her promising to seek out internships and, within an hour, she heard back from him with a lead on her internship.

After graduating from Marshwood High School in Eliot, Maine in 2014, Brigham took a gap year before enrolling at Northern Essex, based on the reputation of its journalism program.

She says she was “revitalized” here at Northern Essex.  “I took journalism with Mary Jo Shaffer and mass communications with Amy Callahan.  I started as a staff writer for the Observer and the following semester, I was editor in chief; writing editorials, doing research, designing the paper, and copy editing.”

Brigham is finishing up a couple of classes at Northern Essex this semester and in the spring she plans to transfer, either to Emerson College or Suffolk University, where she will continue her journalism studies and build her skills in video production.

Brigham always knew she wanted to be a journalist and her experiences at Northern Essex and NBC Boston have confirmed that.  “I know that I instinctively like to inform people and share knowledge, which is why journalism is such a good fit for me.”

Northern Essex offers an Associate Degree in Liberal Arts with a journalism/communication option, which prepares students for transfer and for careers in print or broadcast journalism, including jobs with newspapers, magazines, publishing, television or radio. For more information, contact enrollment services, admissions@necc.mass.edu or 978 556-3700.

For more information about the college’s internship program contact Ashley Moore at amoore@necc.mass.edu or 978-556-3946.