Renowned Guitarist to Speak at NECC 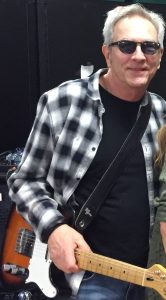 Please note: This event, previously scheduled to take place on March 26, has been cancelled. We apologize for any inconvenience this may cause.

A veteran guitarist of the Los Angeles music scene, Walsh has worked with some of the biggest names in modern music. He has been involved in the production of such 1980s hits as Dolly Parton’s “9 to 5” and Neil Diamond’s “Heartlight,” and has recorded with the likes of John Denver, Eddie Money, Julio Iglesias, and LeAnn Rimes. In the late 1980s, he played guitar with the band Supertramp, with whom he recorded two albums.

Most recently, Walsh played for the Freddie Jackson single “Until the End of Time,” which held the number one spot on the Billboard’s R&B charts for 26 weeks. In 2014, he released an instrumental album titled “The Total Plan” on Weberworks Records.

NECC offers an associate degree in general studies: music and a certificate in music technology.