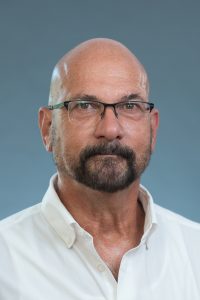 Dr. David Manuel Garcia is the new director of the NECC music program.

What does playing a clarinet and building fences have in common?

That’s right, Northern Essex Community College’s new associate professor of music and coordinator of the NECC music program is adept at both.

When he’s not teaching aural skills and performance and music theory, or tending to his duties as music  director, he works for a North Shore fence company building or repairing fences.

The 63-year-old Cleveland, Ohio, native has been perfecting both skill sets since he was old enough to hold a clarinet in one hand and a pair of pliers in the other. He credits his German mom and Spanish dad with introducing him to the seemingly opposite worlds of music and construction.

While Garcia claims no correlation between the two crafts, it could be argued that as NECC’s music coordinator he will employ all his talents. Just as he might evaluate a fence, Garcia is assessing the NECC music program, looking at its frame, and deciding what, if any changes need to be made to strengthen it.

“We are looking to restructure the curriculum so students can successfully and seamlessly transfer into a four-year music program,” he said. “I would like to increase student engagement and expand the public image of the department by increasing involvement in the two student music clubs, get more people involved with performing ensembles, and if time permits, do some run-out clinics to area high schools.”

While there are currently 25 students currently enrolled in the program, he said, he would like to quickly see that number doubled.

A seasoned orchestra pit veteran, Garcia is also more than familiar with the front of a classroom. He has been an educator as well as practicing musician since he graduated from Bowling Green State University with bachelor degrees in music composition and music education and a master’s in music. He says he is forever indebted to the professor who encouraged him to earn a teaching degree jokingly suggesting he might “never eat” if he graduated with only a music composition degree. Garcia also holds a Doctorate in Musical Arts from Ohio State University.

Composing since he was in high school, Garcia has written hundreds of compositions – 90 percent of which were written for school ensembles. Using a composing program, he said, he tends to write in “batches” and easily can be writing five or six compositions simultaneously.

He hears rhythm everywhere, whether it’s the grind of industrial equipment from his childhood or the roar of the ocean which he visits frequently. All are fodder for inspiration. It is not unusual for Garcia to call his own cell phone and beatbox into his voicemail a piece he might work on later.

He is part educator, composer, conductor, and musician. Garcia has taught at the elementary, high school, college, and graduate level. Returning to a college campus was his goal.

“Northern Essex gave me the opportunity to get back to college teaching (he taught for 15 years at Bridgewater State University) which is what I really like to do,” he said. “I enjoy teaching a community of people who are vested in what they are doing. People come to college and enroll in this program to learn the art and skill of music. They are here because they want to be here. The students here are fabulous overall. They are without doubt, one of the nicest groups of students I’ve ever encountered.”

An Amesbury resident, he and his wife are rehabilitating an 18th century house. They are the parents of an adult son and daughter and anxiously await the arrival of their granddaughter.

Northern Essex offers both an associate degree in music and a certificate in music technology. Both provide the foundation to pursue a career in music after graduation or for transfer to a four-year music program.