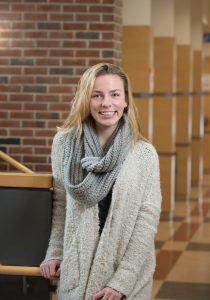 Kiley Broadhurst enrolled at Northern Essex just one year ago, and in that short time has become a leading student ambassador in promoting campus life. But it took a semester at a four-year college to help her realize just how much NECC had to offer.

In the fall of 2016, Broadhurst, a fresh graduate of Timberlane Regional High School, was living and attending college in St. Petersburg, FL. At that time, she didn’t know quite what career path she wanted to pursue. She knew only that she wanted a college education – and she believed that a four-year private institution was the answer.

“When you initially graduate high school, you see that a lot of your peers are going on to four-year colleges and universities,” she explains. “There’s this expectation to do something big following high school, as that’s such a pivotal point in life. For so many people, that means going away to a private school.”

After a semester away, however, Broadhurst realized that her private college education was not providing her with the direction or perspective she expected. Still an undecided major, she watched her student debt accumulate and wondered whether a better alternative was within reach.

“By the time December rolled around, I realized I still had no idea what I wanted to pursue. I just wanted to be at a place that could help me get an education without putting me into considerable debt. And eventually I recognized that the place I wanted was much closer to home.”

That place was NECC and by the end of winter break 2017, Broadhurst had enrolled as a full-time student. Looking back, she feels it’s the best decision she could have made.

“Northern Essex has given me the direction I needed – and so much more. I’m essentially getting the same quality of education that I would get at a four-year school, but for a much lower price!” she says.

Broadhurst has since developed an interest in media and is on track to graduate with her Associate Degree in Liberal Arts: Journalism and Communication in May of 2019. It was this interest that recently led her to launch NECC’s first student Instagram account, @Knightlife_necc, which in just three months has amassed over 120 followers and dozens of posts highlighting the resources, programs, and spaces available to students of the college. This success has only solidified her belief in the value of a two-year college education.

“I’m happy to say my perspective has totally changed since starting here,” she says. “I hope that my story will resonate with other students who are trying to decide what to do with their education track.”

Broadhurst plans to continue on to a bachelor’s degree program at a four-year college next fall.

Northern Essex is enrolling now for the spring semester, which starts January 23. To learn more, visit the website, www.necc.mass.edu, or contact enrollment services, admissions@necc.mass.edu or 978 556-3700.

For the first time, Northern Essex Community College will also host a special event for students who are interested in “transferring in” credits from other colleges and getting on track to complete a degree.

The Transfer In to NECC Information Session will be held on Tuesday, January 8, 2019 from 6 to 7 pm in the Hartleb Technology Center on the college’s Haverhill Campus, 100 Elliott St.