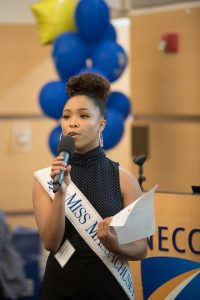 The attendees were welcomed and encouraged to network by NECC President Lane Glenn who said, “There are a lot of wonderful connections to be made here tonight.”

Bill Heineman, vice president of NECC’s academic and student affairs, said he expected everyone to have “some fun practicing their networking skills.”

Nicholas Dolle of Exeter, NH, was there as both a representative for the financial service organization Primerica and as an NECC student enrolled in the Technology & Business Program. A sergeant in the U.S. Army Reserves, he hopes to merge the IT skills he learned in the Army with the business skills he is honing in class.

Alumnus Nicholas Motta of Methuen, a graduate of the Computer & Information Sciences Program works for a digital asset management company Bynder in Boston. He attended, he said, to practice his networking skills and “I like the idea of giving back to the college. I thought it would be good to give back to the other computer science students. You never know who you might meet.”

Connie Bodemer of Lexington a graduate of the American Sign Language Studies Program said she came to the event “for the experience”. “I’ve never been to a networking night before,” she said. “It’s kind of cool. I might even be able demonstrate my ASL skills.”

Doris Wleh, a resident of Lowell and graduate of the Public Health Program is enrolled in Regis College’s public health bachelor degree program and dreams of a dream job in public health. She was eager to circulate among those in attendance. 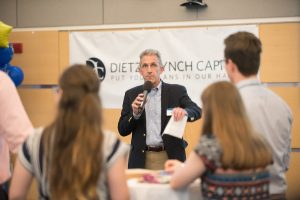 United Way representative Sean Cicero was interested in networking with NECC students and alumni in the hopes of finding individuals interested in in participating in a “meaningful gap year” serving in AmeriCorps in Gloucester working with English Language Learners.

Exuding confidence with a bit of whimsy, Miss Massachusetts Gabriela Taveras schooled the students and alumni on the cardinal rule for finding a job. “It’s not what you know. It’s who you know,” she offered.

She also suggested, “shadowing” someone in a career you are interested in. While shadowing is most often associated with high school students, she said adults do it too. As a former recruiter, she said, resumes should be crafted to the career being sought. She said job applicants shouldn’t be afraid to use superlatives.

As the first black Miss Massachusetts Taveras said she and employers understand superlatives. “If you are the ‘first,’ the ‘biggest,’ or the ‘best’ be sure to let future employers know.”

The Fifth Annual Networking Night was hosted by NECC’s Career Center and Office of Alumni Relations, for additional information contact Deb LaValley at 978-556-3875 or dlavalley@necc.mass.edu or Ashley Moore, director of academic, career, and civic engagement, at amoore@necc.mass.edu 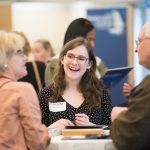 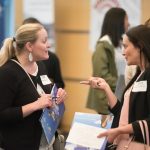 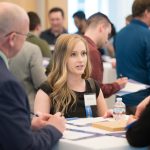