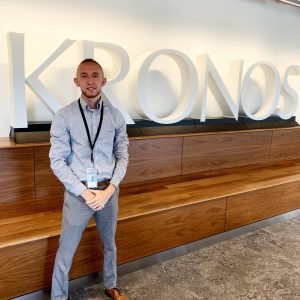 For Stephen O’Meara ’17, it wasn’t a matter of choosing a career path, but knowing how to get there.

By the time he started exploring college courses, in 2015, the North Chelmsford resident was already set on pursuing a future in the technology field. The challenge was finding the best academic path that would get him to his goal.

O’Meara initially enrolled in a technology program at another community college, but, feeling unfocused, left for a fresh start elsewhere. He eventually found what he was looking for through NECC’s General Studies: Individualized Option, which allowed him to customize his technology course track.

“Northern Essex took a different approach,” he says. “And right away the advisors gave me purpose and direction that had me on a path to transfer.”

He explains that because the technology world evolves at such a rapid pace, the biggest challenge was finding a program that would offer a big-picture approach to keep his skills relevant in a highly competitive market.

“It’s very easy to get caught up in specifics just to pass a test. NECC did an amazing job of simplifying this for me,” he notes. “They cut out the stress in the academic world and focused on real world skills and concepts that companies value today.”

By the fall of 2016, O’Meara got a foot in the door when he began an internship with NECC’s MIS department. He emphasizes that this was a turning point for him — and one that would eventually lead to his desired line of work.

“The NECC MIS internship played a crucial part in getting me hired [in my field],” he says. “It helped me realize what the day-to-day at work would really feel like… Overall it was a great experience and it taught me how to be productive in the real world.”

Just five years later, he now holds a bachelor’s degree from UMass Lowell and a rewarding job at Ultimate Kronos Group (UKG), Inc., where he serves as a network engineer, orchestrating tasks related to alerting and monitoring, authentication management, security, and more. He says that he’s drawn to the work because of its results-driven nature.

“I like solving problems that make a difference; seeing how my efforts are not wasted but used to make lives better and easier.”

The compulsion to make a difference is something that O’Meara has carried over to other areas of his life as well — he still returns to NECC to help with volunteer efforts, and most recently served as a guest speaker at an NECC virtual Open House event, where he shared his career journey with prospective students and their families.

To those interested in pursuing a similar career path, he offers a bit of advice.

“Look deeper than getting an A+ on your project and find new innovative ways to create and make a difference!” he says. “Stay laser focused and motivated.”