From Boxer to Accountant 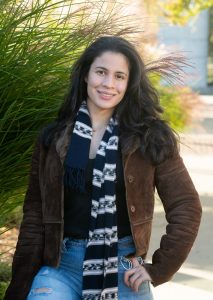 “I had some sponsorships and I was hoping to go pro,” she says, calling herself “a very aggressive fighter.”

That all changed when she became pregnant with her now two-and-a-half-year-old son.

Months later, Mendoza, who was living in Connecticut at the time, found herself alone with her six-month old baby when her husband was incarcerated.

“It was tough when we were by ourselves,” she explains. “I realized that I didn’t want to be dependent on a man. I wanted to get my education, so I was in a position where I could always be there for my son and support him.”

Mendoza reached out to her mother and asked to come back and live with her in Lawrence, while studying for an accounting degree at Northern Essex Community College.

“I said ‘please let me live in your house for two years for free. I’m going to get school done. After that it’s up to me,” she says. Her mom said yes, and it’s worked out for the entire family, growing the relationship between mother and daughter. She, her husband, and son have now moved to their own apartment, just one floor up from her mother, who continues to help her out.

Mendoza chose accounting because she’s always been good with numbers and money, and it’s a practical career with many career opportunities.

She keeps the books for her uncle’s flooring company and last semester had an accounting internship at EN Business Solutions in Lawrence. This spring, she will be working almost full time for H&R Block, while applying to UMass Lowell’s Accounting Program with plans to start in the fall after receiving her associate degree this month.

At Northern Essex, Mendoza, who is president of the Student Government Association and an honors student, says she found a culture of support and positivity. “Everyone wants you to win, everybody.”

Through the help of NECC’s Counseling Services, she also discovered an undiagnosed mental illness, which she views as a blessing since it’s helped her to understand and manage the frequent ups and downs she experiences. “I was excited to get diagnosed,” she says.

Mendoza shares her story in the hopes that it will inspire others to continue their education. “Some people are so whooped with working and other things that they think they can’t do it.”

She also appreciates the support she’s received from her extended family, which includes her husband, mother, uncle and step dad. “This is a privileged position. I’m so thankful to be able to go to college.”

To learn more about the accounting program at Northern Essex, visit the website or contact Enrollment Services, admissions@necc.mass.edu or 978 556-3700.