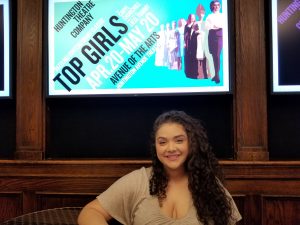 Three years ago, Kiara Pichardo of Lawrence was performing on the stage of NECC’s Top Notch Theater, and now, she has a role in “Top Girls”, on stage now through May 20 at Boston’s Huntington Theater.

Pichardo, who received a Liberal Arts Degree: Theater Option from Northern Essex in 2015 with honors, transferred to Fitchburg State College and graduated last spring with honors and a bachelor’s in communications media and a concentration in theater.

She is the only non-equity actor in the cast of seven women in the Huntington Production of “Top Girls”, which was written by Caryl Churchill in 1982.  The performance is directed by Liesl Tommy, an award-winning stage director, who Pichardo calls “amazing” and “down to earth”.

Pichardo landed the role after three auditions.  She plays the waiter, Kitty, and Shona, all with a British accent, which she first experimented with on stage at Northern Essex in the 2013 performance of “The Beaux Stratagem”.

While at Northern Essex, she also performed in “How the Other Half Loves”, “Real Women Have Curves” and “Front”.

Pichardo came to Northern Essex after graduating from Lawrence High School’s Performing & Fine Arts Academy in 2012.  She was interested in photography, not theater, but tagged along while her cousin was auditioning for “The Beaux Stratagem”.  No one was more surprised than she was when she walked away with the role of Cherry and the knowledge that “this was what I wanted to do for the rest of my life.”

She was consecutively nominated for the Irene Ryan scholarship at The Kennedy Center American College Theater Festival for her performances as Teresa in “How the Other Half Loves, Cherry in “The Beaux Stratagem”, and Lila in “Late Arrival” (The Top Notch Players). Film credits include Katherine, “Polite Police”, and “Knock Knock” (2017 Revolution Me Film Festival Best Actor award).