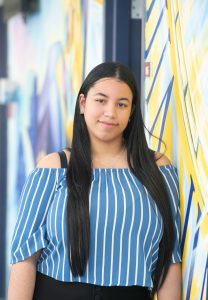 When Kimberly Justo graduated from Lawrence High School in 2020, she was thrilled to receive many college acceptances—including an offer from her “dream school” Bryant University in Rhode Island—along with strong financial aid packages.

Still, she soon realized that she would be taking on substantial debt, and, as a practical person, paying for college herself, she knew she didn’t want to do that.

That’s why she decided to enroll at Northern Essex Community College for two years and earn her Business Transfer associate’s degree, before transferring to a four-year institution.

Sweetening the deal for her was the Lawrence Promise Program, which offers a free associate degree, covering tuition fees, a laptop, and textbooks, to graduating high school students who were enrolled in the Early College Program, taking Northern Essex classes while in high school.

Justo will graduate debt-free from Northern Essex in May with a 3.97 GPA (straight A’s plus one A-) and plans to transfer to UMass Amherst. Based on her stellar academic record, she has received significant scholarship packages from both schools.

Just 20 years old, Justo arrived in Lawrence from the Dominican Republic four years ago, speaking no English. Determined to learn the language, she taught herself in two months, primarily by watching television.

She’s soft-spoken, calm, and focused on her education and her future career. “I try to think about why I’m like this. I don’t like to fail. I like the way it feels when I’m doing my best.”

Justo also isn’t afraid to reach out for help, relying on many of the college’s resources including the academic and transfer advising offered through the PACE Program; the tutoring center, which she “always uses”; counseling services; and the college food pantry.

When she was looking for a summer job in the accounting field, she reached out to Career Services and, with their help, wrote an “awesome” resume and cover letter, which has already resulted in interview appointments.

For Justo, Northern Essex is the first step in her educational journey. After earning her bachelor’s degree in accounting, she wants to continue on, with CPA certification and graduate degrees in her field.

She says many of her friends didn’t attend college after high school, and she’s determined to change that. Thanks to her encouragement, two of her closest friends enrolled at Northern Essex this past semester, including one who is on track for a nursing degree.

As a high school senior, it was difficult to let go of the idea of her “dream college”, says Justo, but now, close to earning her associate degree, she wouldn’t change her decision. “I was kind of scared when I was starting college, but Northern Essex has resources that have helped me a lot. I feel ready to succeed at the next level.”

To learn more about the May 14 Commencement, visit the website.